Manicured, the grass is not. The outfield isn’t fenced, and the infield dirt is neither lined nor raked.

The patchy, scarred, multi-colored outdoor space is devoid of any diamond shape.

Yet it is a field of dreams.

Kids bike, ride buses and even walk to Battle Creek Middle School to participate in a free summer baseball camp. Everything is provided: snacks, water, lunch, balls, bats and gloves, and even a hat, which they get to keep.

The kids need the help; most of them attend or just finished at Battle Creek Middle School in St. Paul, Minnesota, where 82.1 percent of all students receive free or reduced lunch. On the first day of the baseball camp, one of the volunteer coaches asked how many of them had eaten breakfast.

No one raised their hand.

“We serve a lot of students who don’t have these opportunities,” said Shannon Cagle, a special education teacher at Battle Creek Middle School. “No one is discouraged from being here.”

Cagle sits in the shade, proudly watching as a foster child she is caring for, Aidan, is among the dozen kids participating in the camp. On day one, nary a tossed ball was actually caught. But in the second-to-last week, they were running the bases properly, consistently fielding routine popups and grounders and slugging the ball into the outfield.

There were laughs, high-fives and lots of kudos.

“He’s not been very involved in a lot of structured sports,” Cagle said of Aidan. “But he’s had lots of proud moments. When we leave, he said, ‘Thank you very much for signing me up.’ ”

This camp is provided through The JP4 Foundation, which aims to provide baseball participation opportunities to those in need and honors compassionate club standout Johnny Price, who died in a car accident in 2015.

“They are doing what John John would have wanted,” said Elisabeth Price, Johnny’s mother. “His soul and his spirit is right in the middle of all this.” 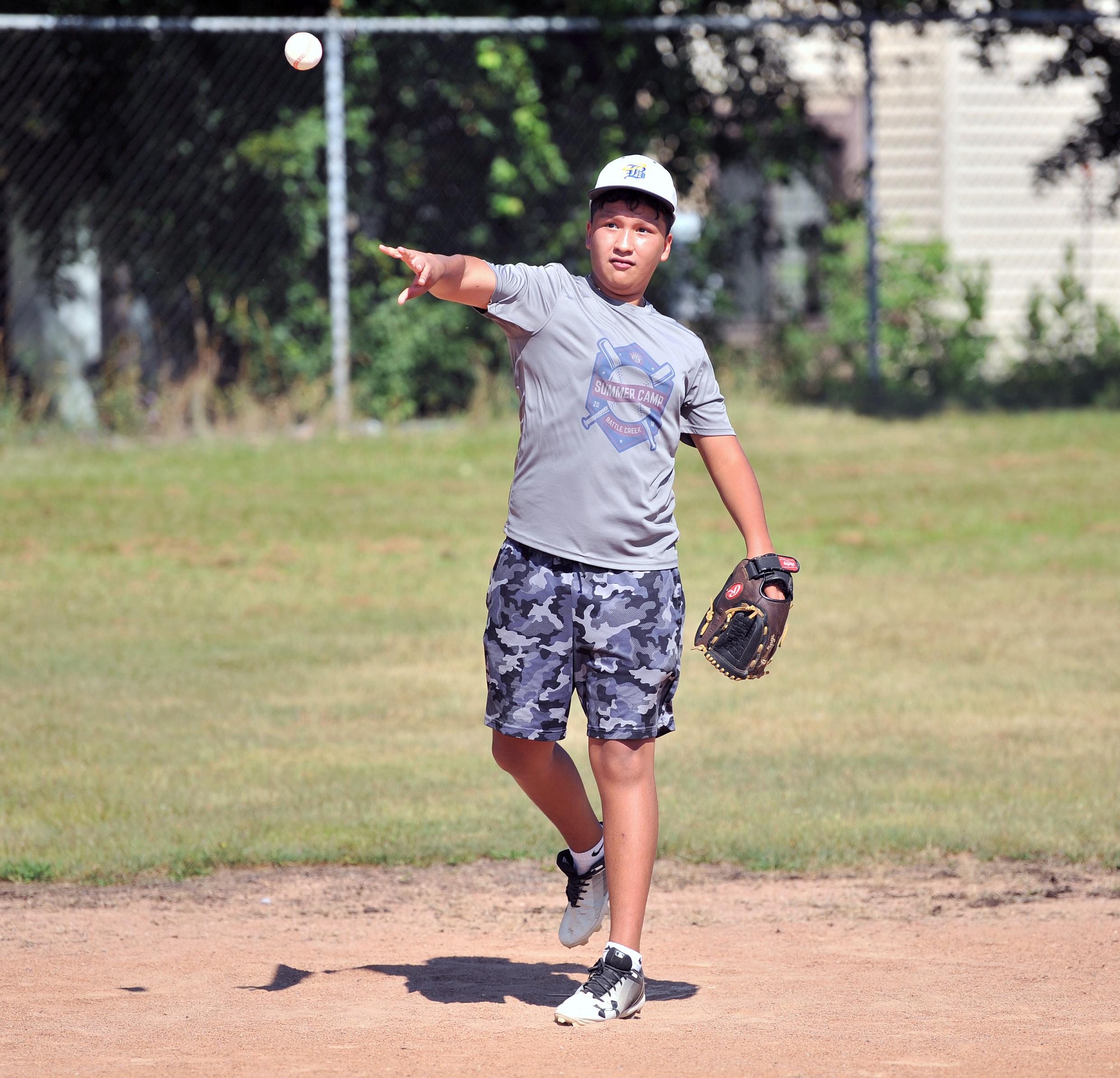 Once a week this summer Louie Favila walked the two miles from his East St. Paul, Minnesota, home to a baseball camp run by The JP4 Foundation. Photo by Loren Nelson, SportsEngine

In its first year, the camp serves 12-16 players, though eight regularly show up.

Louie Favila is one of them, and he anxiously leaves his East St. Paul home at 9:15 a.m. every Tuesday to walk to Battle Creek Middle School. He usually walks past Jimmy’s Market on White Bear Avenue, cuts along a frontage road that runs parallel to Interstate 94 toward a three-story, 68-unit apartment complex. As soon as he crosses over the highway, Favila passes an Aldi before hitting a residential neighborhood in which the school stands.

He once made the 45-minute, two-plus mile walk in the rain.

“I love this sport, I love how we’re outside and the drills,” Favila, a pitcher and outfielder, excitedly said. “I love everything. I wish I could come here every day all summer.”

Asked what he would be doing instead, Favila’s mood and tone change.

“I probably would just be inside,” he said, “watching TV or playing video games.”

Sadly, Dominic Carr and Jimmy Logan also say the camp is a welcomed break from their indoor-confined routine.

“I usually stay home and do stuff around the house,” Logan said. “(The camp) gives me something to do; then it’s not a boring day.”

Added Carr, “I like how it keeps me busy so I don’t be at home all day.”

The challenges these campers face are starkly different from JP4 Foundation director Jeff Huth, who grew up playing baseball in the suburbs. A four-time All-Conference player at West Lutheran High School, Huth shined for the Minnesota Blizzards, arguably the state’s most successful traveling and club baseball program. According to its website, the Blizzards boast more than 81 national titles, over 315 players who have committed to play college baseball and 30-plus who have been drafted or signed as free agents by Major League Baseball.

After playing at a high level in junior college, Huth returned to the Blizzards as a coach, where he led his team to a No. 1 national ranking, numerous titles and a 47-6 record.

But in 2016, Blizzard owner Adam Barta called Huth into his office.

“I have this dream of bringing baseball to everyone,” Huth recalled Barta telling him.

Barta asked Huth if he could start the program’s nonprofit.

At the time, Huth couldn’t have been more content. He was a tenured teacher, working at inner-city public schools. But he was frustrated that his favorite sport wasn’t accessible to most of his students.

“It’s very evident my students of color didn’t have access to baseball,” Huth said. “And with my privileged background, my whole life was around baseball. I wanted to do something about that.”

So he gave up tenure and summers off to start The JP4 Foundation in September 2016 with no budget. But he tapped his network for ideas and funds, with his first meaningful break coming via a sponsorship from Twin Cities Orthopedics the following January.

From his experience as a teacher, Huth recognized the importance of many students needing outlets during the summer.

“I understand that it takes one bad decision for life to take a right hand turn,” Huth said. “So I want them to have something positive to do every Tuesday for eight weeks from 10 to noon.

“I love baseball, and it’s done so much for me,” he added. “Even though these kids may not play in college or even high school, to teach them about life through the game of baseball is an absolute win.” 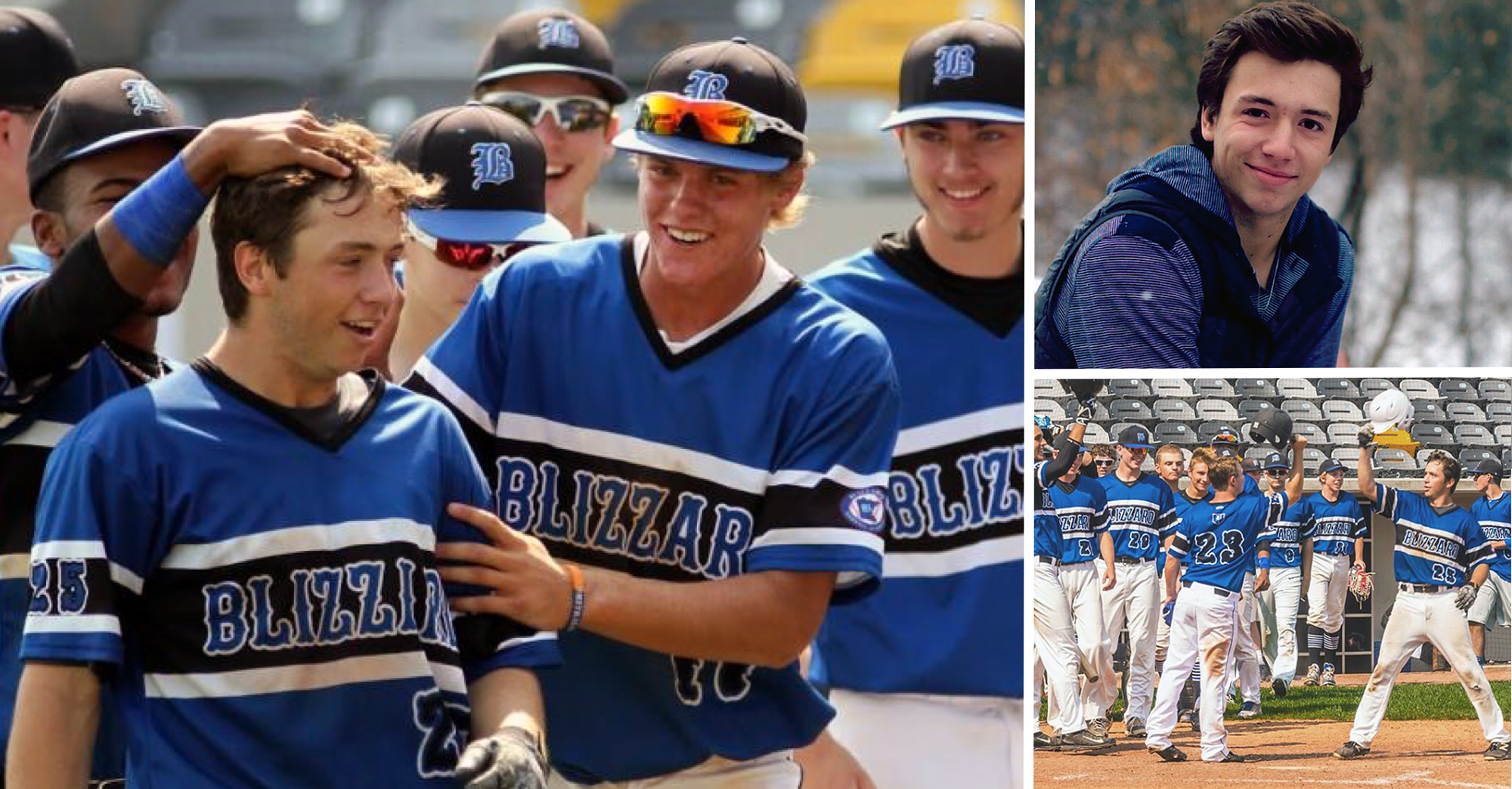 The JP4 Foundation honors the memory of club standout Johnny Price, who died in a car accident in 2015. Courtesy photos

John “Johnny” Price IV is among the multitude of talented baseball players from the Blizzards. A Division I recruit, Price could play virtually every position, and he was potent with his bat, too. His legend was secured in a weekend three years ago, when he hit three home runs, including one at iconic CHS Field in St. Paul, to power the Blizzards to the ScoutStop Select title. His final stat line for the tourney: Price went 10-for-16 (.625 batting average) with 10 RBIs and six runs.

But Price endeared himself as an ideal teammate, a committed community volunteer and teacher of the sport he loved to all who showed an interest, regardless of skill level.

Price’s family could afford the training sessions, out-of-town tournaments and, of course, the best equipment. Yet Price’s father, John A. Price III, grew frustrated when his son came home without a glove.

“My husband went nuts. ’This is a lot of money,’ ” Elisabeth Price recalled her husband saying. “You can’t take it for granted. I can’t believe you lost it.’ ”

Johnny Price accepted the tongue-lashing. Then he “lost” another glove a few months later.

In December 2015, Price was one of two Lakeville South High School students who died in a car accident.

After his passing, Price’s parents learned what happened to those gloves.

Johnny Price had given them to players who couldn’t afford one.

“I lost it. I felt every emotion,” Elisabeth Price said. “I can’t believe we yelled at him. I don’t know many kids who would take that and keep their mouth shut.

Elisabeth Price also questions an expensive bat her son “lost” while in Atlanta for a tournament.

“There have been many wonderful people in the Blizzard program since 2003, and Johnny was one of the greatest,” Barta said in a comment posted on the program’s website. “People will ask why such an amazing person was taken so early, but I like to think about how incredibly lucky I was to have known him while he was here.”

Elisabeth Price said she’s thankful for the Blizzard’s values, which aligned with her family’s. That is why she and her husband didn’t hesitate when the program wanted to honor their late son in different ways.

“It’s beautiful,” she said. “I wouldn’t have let anyone else touch his name. (The Blizzard) don’t just make baseball players. They teach being a good teammate, being charitable and respecting your parents. Those are mandatory things.”

As the foundation grows, Huth is hopeful to provide these camps at other inner-city schools so more students who otherwise couldn’t afford to learn the game can do so. He constantly thinks about Price, though he doesn’t feel too much pressure.

“Johnny Price’s passing jumpstarted this,” Huth said. “But we don’t make the legacy, we’re just here to propel it because Johnny already cemented his own legacy.” 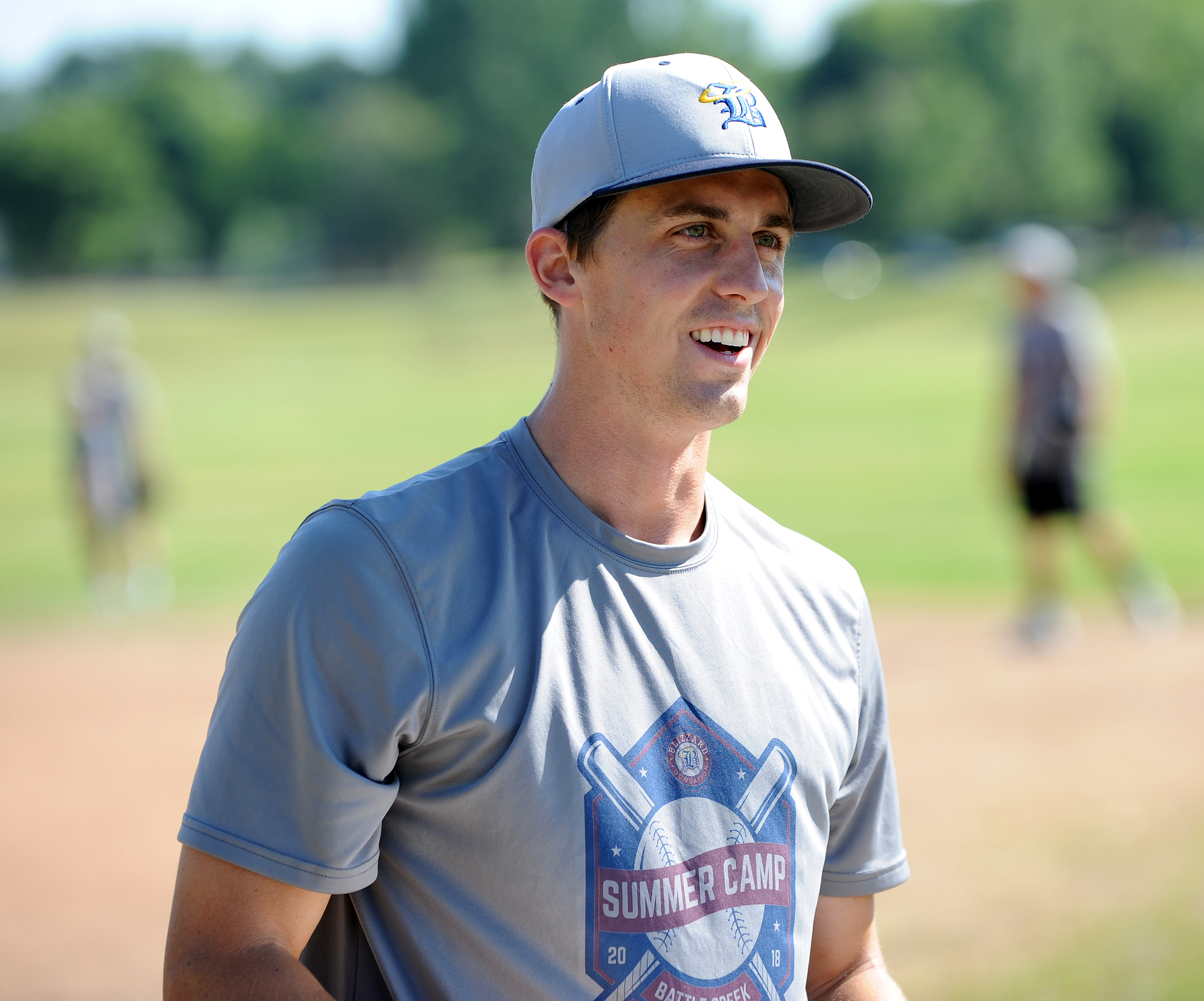 “I grew up watching those guys and watching the ’87 and ’91 Twins,” Shoemaker said, referring to World Series champion teams. “I was obsessed with Kirby (Puckett) then I played baseball.

A sixth grade reading and writing teacher at Battle Creek Middle School, Shoemaker also coaches the baseball team. But the kids only play during the spring season, and they don’t have the resources and experience of other St. Paul Public Schools; cleats and even gloves aren’t a given for Shoemaker’s players.

“We haven’t had too many winning years,” Shoemaker said, “but the greatest thing is, when they come back, and they’ve played four years at Harding (High) or Johnson (High). We want to make sure there is an opportunity to play baseball on the east side.”

We want to make sure there is an opportunity to play baseball on the east side.

That’s why he was excited to connect with Huth and provide this camp opportunity for some of his students who love the game but can’t afford to play it more.

Besides, Shoemaker loves that baseball inherently fosters hope through failure; a really good batter only hits the ball one out of three times.

Over the eight-week camp, the players have had a lot of fun while learning about setting goals and developing habits and routines from Harvey Martin, a pitching coach and founder of the MindStrong Project.

They’ve also become better baseball players. Favila learned how to use his hips and lower body to throw the ball harder and hit the ball further. Carr learned the importance of twisting his back foot to generate more power at the plate. He’s proud to have hit a few home runs at the camp.

But this is more than baseball.

One of the students admitted that they only came initially because of the free lunch.

On the final day, one of the players disappointingly walked up to Huth.